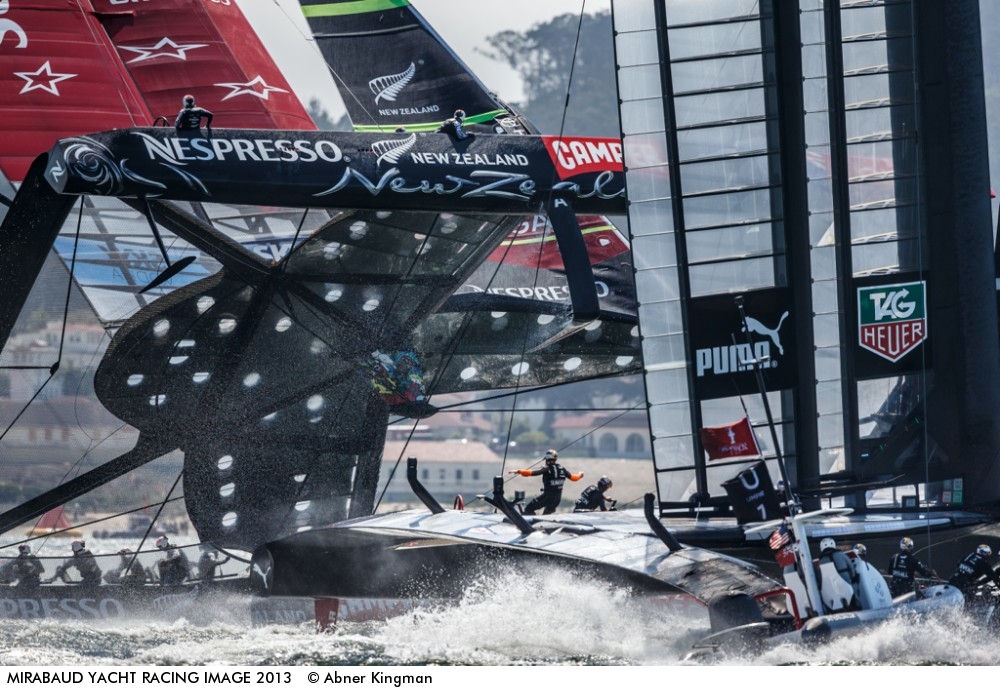 Gothenburg (SWE), December 11, 2013 - 82 professional photographers spanning nineteen countries took part in the Mirabaud Yacht Racing Image 2013. US photographer Abner Kingman, based in San Francisco, won the main award further to a selection made by an international jury consisting of nine specialists from the yacht racing and photographic industries (see list below). Rick Tomlinson (UK) won the prize of public.

Aged 44 and the father of two children, Abner Kingman, has been awarded for his photograph of Emirates Team New Zealand and Oracle Team USA, taken during race 8 of the 34th America’s Cup in San Francisco (USA). The shot captures the precise moment when Oracle Team USA took over the lead on Emirates Team New Zealand whilst ETNZ almost capsized; the turning point in the last America’s Cup. «As Emirates tried to tack on top of Oracle, their wing articulation hydraulics failed and they couldn't trim properly», explains winner Abner Kingman. «I was shooting from the aft deck of the television catamaran when they started to capsize, it seemed to unfold in slow motion. Finally, their starboard hull came down with a splash. It took a moment for ETNZ to get sorted out and start sailing again, while Oracle went on to win the race, and then nine more of the next 11 races.»

Knut Frostad, CEO of the Volvo Ocean Race, voted for Kingman’s photograph: «The image tells the strongest story of all the pictures. It is really capturing a historic moment, you can read a lot into it.»

Didier Ravon Editor in Chief of Voiles & Voiliers (France), said: «The level of this contest is very high and it has helped me to discover new names and new talents in yacht racing photography. When I saw the pictures presented for the contest, I thought: I would have loved to have taken at least half of the pictures presented!»

UK photographer Rick Tomlinson wins the «Public Award», selected by the delegates from the World Yacht Racing Forum in Gothenburg (Sweden). The delegates were asked to name the best yacht racing photograph of the year out of the twenty pictures preselected by the public on Internet. Tomlinson’s photograph was taken during trials of the new Volvo Ocean 65 SCA.

A selection of the photographs got sold during a silent auction on Tuesday night, in favour of the Andrew Simpson Sailing Foundation, raising over 4’500 Euros.

Thanks to the support of Mirabaud, TAG Heuer and Nespresso, as well as the event’s media partners, the Mirabaud Yacht Racing Image 2013 has been very successful: the dedicated website has been visited by more than 100’000 individual visitors in just one month, and there have been close to 600’000 page views.

The Jury of the Mirabaud Yacht Racing Image 2013: